You have most likely noticed all the construction downtown on Superior Street over the last few years, but did you know this project will also help to create a more renewable Duluth? With the reconstruction of Superior Street, the City of Duluth used this opportunity to enhance the infrastructure of the district heating system currently in place in downtown and Canal Park. Duluth Energy Systems oversaw the transition of its current Open-Through Steam System into a more efficient and environmentally-friendly Closed Loop Hot Water System. The update will reduce energy consumption across the system and will lead to the decreased use of fossil fuels and the reduction of carbon emissions.

So what is the difference between Duluth’s Open-Through Steam System and Future Closed Loop Hot Water system, and what makes the latter better? 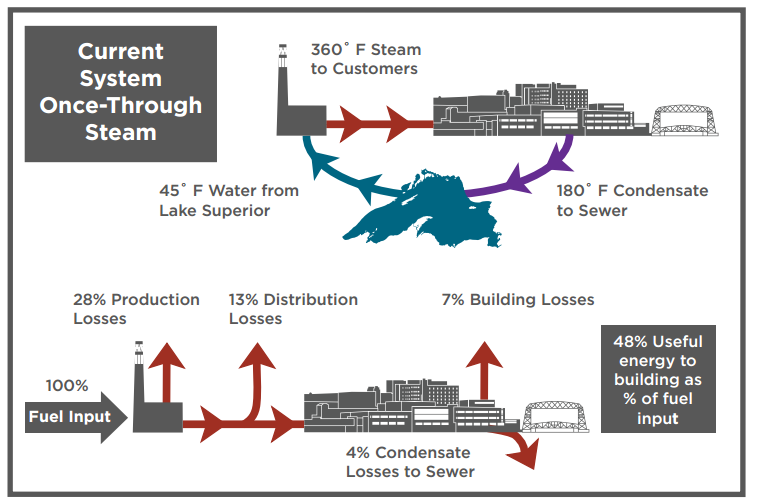 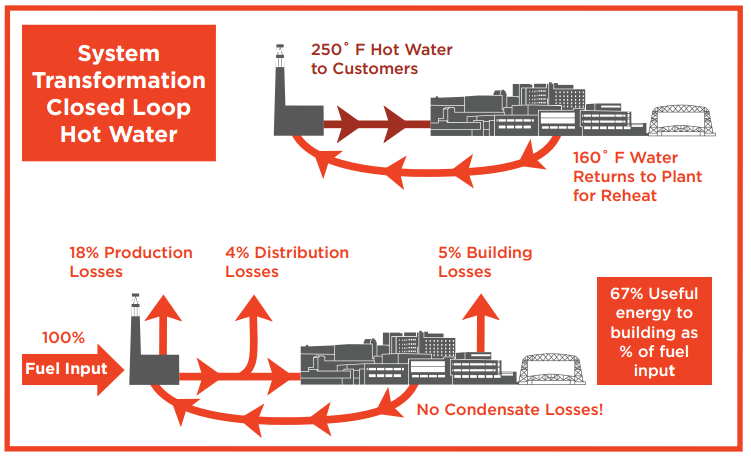 In the current Open-Through Steam System water is taken from Lake Superior and heated to an extreme temperature, around 360 degrees Fahrenheit, turning it to steam. This steam is distributed throughout the network of pipes and radiators in downtown for heating. After the steam is used it cools to around 180 degrees Fahrenheit, turning back into hot liquid water where it is then dumped into the current sewer system. From start to finish there are a lot of areas where energy is wasted compared to the Closed Loop Steam System.

The closed loop system being installed will have many benefits over the former system. Like it’s name alludes to, the system is completely closed. Water will be heated to a temperature of 250 degrees Fahrenheit and distributed throughout the pipe network. It will return to the plant at 160 degrees Fahrenheit where it can be reheated and redistributed. This allows for less fuel to be used to heat the water each time as it returns to the plant.

With the system overhaul, consumers will see upgrades to both the distribution network and building equipment. This will help not only cut down on maintenance costs but lead to more efficiency and reliability. Simplified building controls alongside a real time energy monitoring system will allow for great rate stability and financial predictability. The project also paves the way for an increased growth in the overall capacity of the system.

Reliability and efficiency of the new systems will lead to many benefits, not only for you the consumer, but to the environment as well. The new closed loop system will be using less water and less energy, this will amount to a reduction in greenhouse gas emissions and 20 million less gallons of Lake Superior water will be used each year. This will also allow Duluth Energy Systems to look into more environmentally-friendly and renewable sources such as biomass.